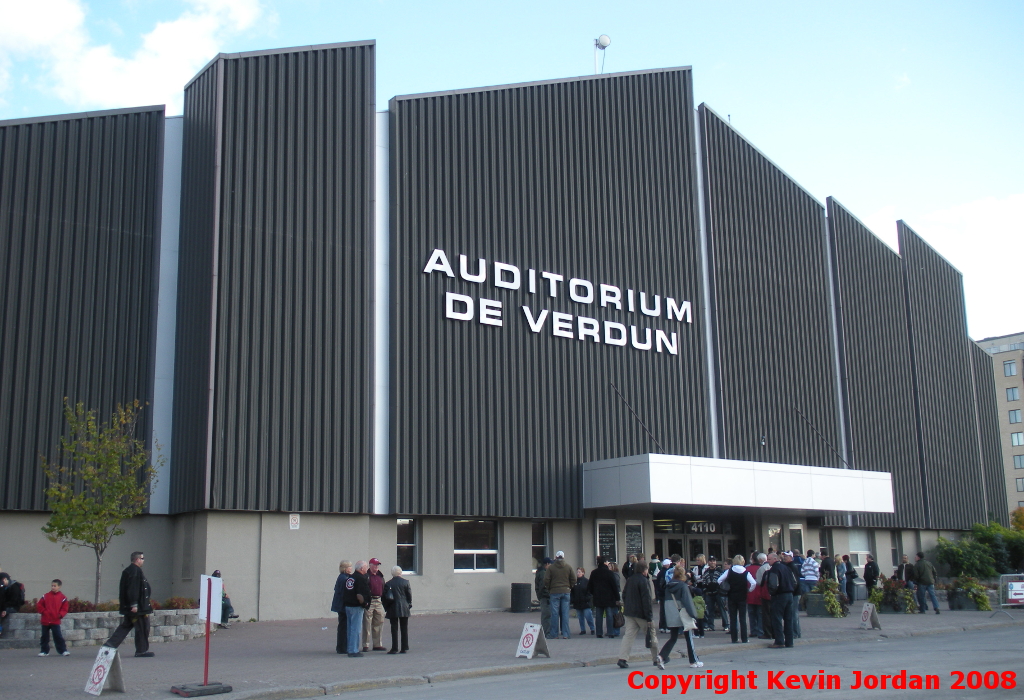 Apropos of nothing, when I went to see the Montreal Junior play in Verdun in 2008, I wrote a hopeful review about the future of junior hockey in Montreal, that opened with a statistic: QMJHL franchises have failed in the Montreal area seven times. And technically, the Montreal Junior made it eight. But the franchise is still in the Montreal area, now playing up in Boisbriand on the north shore, and they're doing reasonably well there. The review that follows retains some of that optimism, because at the time, it really seemed like this time it might have worked. We all probably should have known better.

When my adopted St. John's Fog Devils were purchased by a Montreal businessman who announced that the team would be moving to the Verdun Auditorium, I reacted with a little skepticism and a lot of heartache. As a long-time fan of one of the cornerstone franchises of the OHL, having my junior team move was something that I had never experienced, and with the 2008-09 edition of the Juniors still possessing two players on the roster that I watched during my year in Newfoundland (Pat O'Keefe and Matt Fillier), I really had no idea what to expect while walking down boul. de l'Église from the Metro station to attend my first Montreal Juniors game. And the surprising thing that I found - this time in Montreal, junior hockey might actually work.

The Verdun Auditorium is located right on the St. Lawrence River in a quiet, working-class residential neighbourhood. It is instantly recognizeable down the street as you exit the de l'Église Metro stop. The arena itself is on a small grounds with limited parking, and a St-Hubert restaurant virtually on the front lawn. The front of the building is covered in hideous black aluminum siding at strange angles, giving it a 60's-70's pop art feel, but if you walk around the exterior of the rink you can see the original red brick on the other three sides. A large white marquee sign announces the arena as the Auditorium de Verdun. There is also a more modern addition to the left of the main auditorium, which is the Denis Savard Arena and is a community rink.

The large lobby of the arena has ticket windows and a booth set up with the team store, which at this moment is just a pair of teenage girls and a couple card tables. Still, merchandise selection is impressive, and includes jersey t-shirts, which I haven't yet seen anywhere else in the CHL. Once past the ticket booths, there is another small concourse which includes, at least for the 2008-09 season, free pizza and pop. I instantly approved of this. From that concourse, you can either go left or right up the stairs to the top concourse, or straight ahead to the seating bowl.

Verdun Auditorium feels big. It's an old arena and only holds 4,100, but it's spacious, and the high ceiling and wide concourse on the arena floor between the seats and the glass just adds to the feeling. The concourse actually includes the players benches, which are separated from the public areas only by a chain and a security guard. The rink has recently been repainted in the Juniors' maroon and white, and it feels homey. The ice surface is surrounded by a ring of stained wooden seats, which I don't believe I've ever seen anywhere else. The slatted seats are old and uncomfortable, and most of them are claustrophobic two-man benches. The seats form a bowl around the ice, but in one end, they also extend above the top concourse to the roof. For the game I attended, those sections were closed and blocked off by a gate, which was unfortunate as I usually love sitting that high at games. Another interesting quirk of the building is that the Zamboni doors don't extend down to ice level, and so every time the ice is flooded, workers have to put a ramp in place so the Zamboni can drive down the six inches or so to ice level. It's a strange sight for sure.

Scoreboard duties are handled by a single, old centre scoreclock. There is an ancient-looking digital board in one end of the building, but it was sadly unused. Washrooms are fine, and there weren't any lines that I could see. There is a small canteen-style restaurant underneath the small upper seating area in the one end of the building, and while it's tough to compete with the free pizza down below, the food is pretty cheap. One other thing that must be mentioned - the team has shovel girls that clean the ice in stoppages wearing clothing that, shall we say, would not insulate well against the cold of said ice. While I don't object to scantily-clad women in principle, it's a shame that the Juniors feel that they need the distractions to draw people in.

As a new franchise, it's difficult to get a handle on which things are going to be a part of the Juniors' experience for years to come and which are simply trial and error, but there were a few annoyances. First, the speakers are way too loud and drown out all conversation during stoppages. Most hockey teams have figured out that no one wants them to blast the volume at rock concert levels, but the Juniors are still new at this. In addition, between the cavernous size of the arena and the old speaker system, most of the sounds come out as distortion anyway. I also would have liked to have seen Montreal's junior hockey history on display a little more. In spite of the long history of junior hockey in the city, including teams with the same "Juniors" name, there were no banners, no pictures, and no other history anywhere to be found. It would be nice to see the old Memorial Cup teams from the glory days of the Montreal Junior Canadiens honoured, in a similar fashion to the Edmonton Oil Kings banners now hanging in Edmonton. Finally, it struck me as a little odd that in spite of having the most expensive tickets in the CHL, there were no ushers anywhere to be found to enforce the seating segregation. When people can buy $15 seats and then move into the $50 seats with no hassles, they're not going to spend the $50 for long.

In the last season of the Montreal Rocket, they frequently drew less than a thousand people to games at the 21,273-seat Molson Centre. There was never any reason to expect that things would be different this time around, or indeed any of the other previous six times that junior hockey has failed in Montreal. But it's also worth remembering that Montreal-based teams have won the Memorial Cup four times. That the Junior Canadiens used to sell out the Montreal Forum in the 1960's. That the Laval Titan were one of the cornerstones of the league for twenty-five years in spite of playing in a crumbling arena in the middle of a residential area, and produced stars as destined for greatness as Mario Lemieux.

Which Montreal is going to turn out for the Juniors? So far, it seems that the good Montreal might actually win out. The game I went to had 2,840 in attendance - a perfectly respectable total for an early-season game and a new team - and the crowd was knowledgeable and into the game. Juniors sweaters dotted the audience. So far, the vital signs are good. $50 is ridiculously over-ambitious for junior hockey tickets, and the Verdun Auditorium will probably need private suites, new seats, and a new scoreboard and sound system to be viable in the long-term. I am sad that the Fog Devils were lost to create the Juniors, and it was bittersweet watching O'Keefe and Fillier again in different colours. But amazingly, Montreal might actually pull it off this time. And if they do, the QMJHL will be a far stronger league for it. 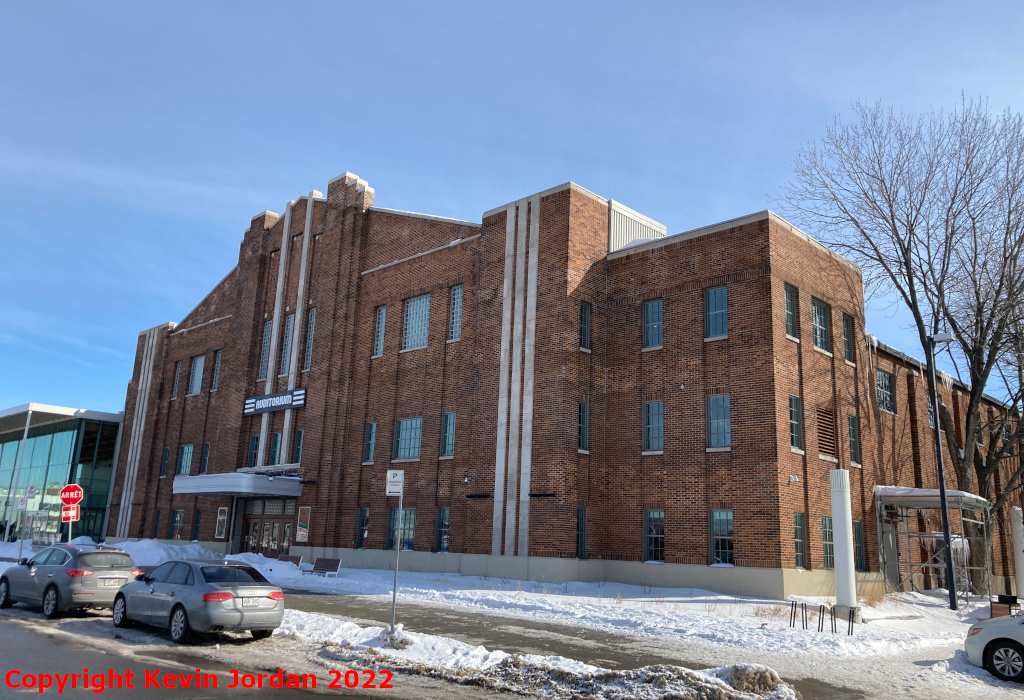 What's the Arena Used for Today?
After the Juniors moved out to the suburbs, the Verdun Auditorium has been without a major tenant. It is still used for youth and recreational hockey, and as an occasional practice facility for the Montreal Canadiens. In 2018, the city of Montreal launched a massive restoration and renovation project on the Auditorium which will retain the building's character but bring it up to modern standards; among other things, the renovation will remove the 1960's aluminum cladding on the front of the building and restore the original brick façade underneath.