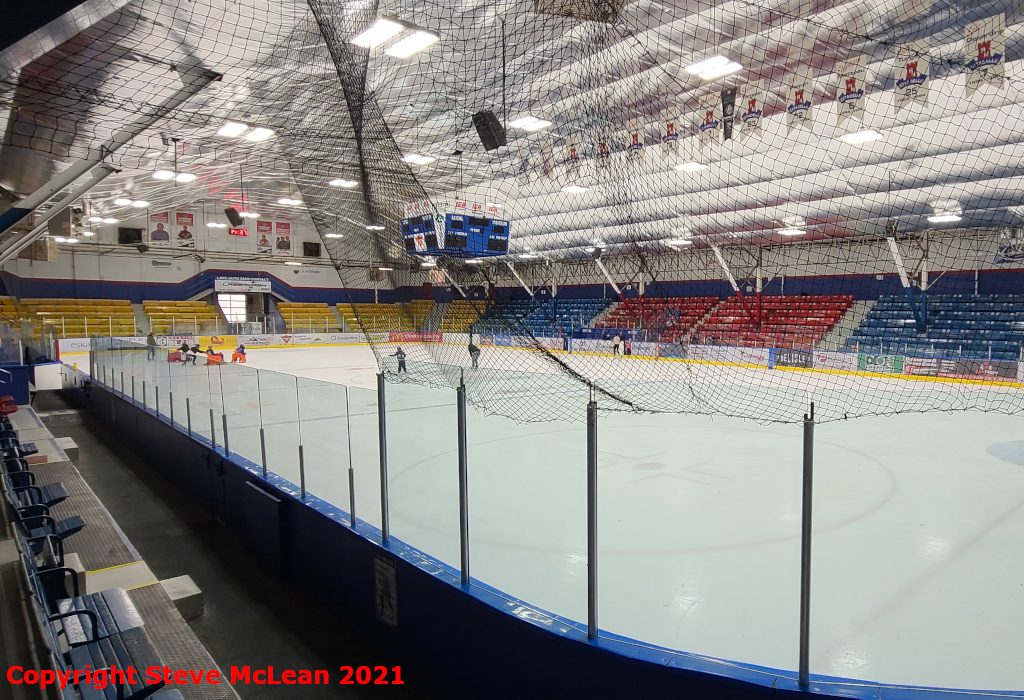 The Iamgold Arena in Noranda underwent renovations over the summer of 2011, and as occasionally happens, they went over the amount of time budgeted. As a result, the Huskies were forced to play a handful of games at the start of the year at a neutral site - which happened to be the Jacques Laperrière Arena in Rouyn. I personally didn't stop in when I went to Rouyn-Noranda in 2007, having had no real reason to at that time, and as a result, this is the only current or former OHL or QMJHL arena which I haven't been to. And yes, it does bother me, thanks for asking.

Nik Coulter attended a game there, and sent his thoughts:
My wife and I drove up to Abitibi-Témiscamingue region this weekend to see our beloved Olympiques on the road. In addition to seeing two wins, we got to experience the pure awesomeness that is the Aréna Jacques Laperrière in Rouyn.

This arena was built in 1949, and as far as I could tell seated 1500-1800 or so people (I'm all but certain it was comfortably under 2000). Anyway, there's not much on the internet about it, so I can't speak as to what the exact capacity is, but 1949 is certainly one of its vitals, as shown by the date set in the floor of the foyer. I, regrettably, did not take the time to try to find a plaque or corner stone. I also can't find the dimensions of the ice, but from where we were sitting, it looked to be regulation length (as opposed to the shockingly short ice in Val-d'Or), but narrower than 85'.

The back-story to this all, is that the Aréna Dave Keon (today l'Aréna Iamgold) is undergoing renovations. The Huskies did not have a home game until October 14th, likely putting off home dates so that they could get their arena finished up. Anyway, they didn't, and they've played their first nine home games at this other arena over in Rouyn. They say that they'll be back in their main arena for their next game (on the 24th), but it's still looking a little rough, so I don't know. L'Aréna Jacques Laperrière is the home of Rouyn-Noranda's Midget AA team, the Citadelle. As an aside, the beautiful new scoreboard in Val-d'Or still had Rouyn-Noranda and Apollos as the teams that were playing. Evidently, the Citadelle had been in town shortly before the Olympiques/Foreurs game.

Getting to the point, I took a few pictures of this arena for your website. It was too amazing for words. We entered into a fairly small foyer that was full of people, and were primarily concerned with trying to get a hold of the tickets that we had bought over the phone. Once we were inside, I went off to find the souvenir stand so that I could take care of that before the game started. I gather that it was not an atypical setup from your guide. I entered at the end of the rink, and we turned to the right towards the section where our seats were. We climbed to the top of the stands (where the main concourse was), and then turned back towards the foyer. Over top of the ticket booth/foyer area was the restaurant/bar area. Not being a regular QMJHL arena, there was no formal souvenir booth. The Huskies had set up a table, and were selling a pretty generous selection of merchandise, considering the situation. For what it's worth, I paid fully $10 less for exactly the same things (2 pucks, a mini stick, and a t-shirt) than I did the night before in Val-d'Or.

Once we got to our 'seats' (they were fold down benches), I wandered around to take a few pictures. The seating did not wrap entirely around the rink. The stands were in a sort of U shape with the end nearest to the main entrance not having seats. When we sat down, we were on the side, near the other end (the end with seats). I was told that the seats at the end were reserved for season ticket holders. Knowing that, I was disappointed that were were going to be at the end where we would see Gatineau shooting in the second. Surprisingly, we did not. When the teams took the ice for the warmup, Rouyn-Noranda was at our end, and we got to see Nos Olympiques shooting at our end twice. Now, this did have a drawback that I'll get to in a second.

Here's the part where I point out just how bush-league of an arena this is. As the Huskies trickled off the ice at the end of the warmup, they didn't go back through the Zamboni doors at the end (where they came out). One by one, they came through a little side door at the bottom of our section, and walked around between the first row and the boards back to the hallway.

The drawback to where we were sitting, was that our net was down at the other end of the ice in the first and third. We could see the net, but about half of the far end of the ice was blocked by the beams supporting the roof! We were constantly in a panic whenever we lost sight of the puck.

The only other snack stand in the arena appeared to be at the far end of the ice from the main entrance, in the corner, at the top of the concourse.

The fans in Rouyn were loud, but I'm disappointed by their reliance on those little plastic horns. There were the three of us, three other Olympiques fans behind us, and maybe a half-dozen or so other Gatinois scattered throughout the arena. Let's say a dozen of us. At several points throughout the game (especially after we scored each of our four goals), our cries of Go Hull Go! filled the arena with noise that was almost as loud as the Rouynois fans. I think we were louder than they would have been, were it not for those silly horns. Whereas the fans in Val-d'Or just seemed mildly confused by our presence, the fans in Rouyn seemed a bit annoyed by us. I had a pretty good exchange with their mascot. There were a couple of people in Val-d'Or who didn't seem to appreciate our presence, but there were people who spent a large part of the game staring at us in Rouyn. My wife could hardly control her laughter at times.

What's the Arena Used for Today?
Rouyn and Noranda were separate twin cities until 1986, so in spite of the fact that there are only 40,000 people in town, each city has its own classic, old-school arena. Dave Keon Arena (formerly Noranda Recreation Centre) in the northern half of the city was selected by the Huskies as their permanent home, whereas the smaller Laperrière Arena (formely the Rouyn Forum) was not. Now that Rouyn and Noranda are combined, both arenas are used interchangeably by the city.

Return to Arena Iamgold
Return to the Main Menu