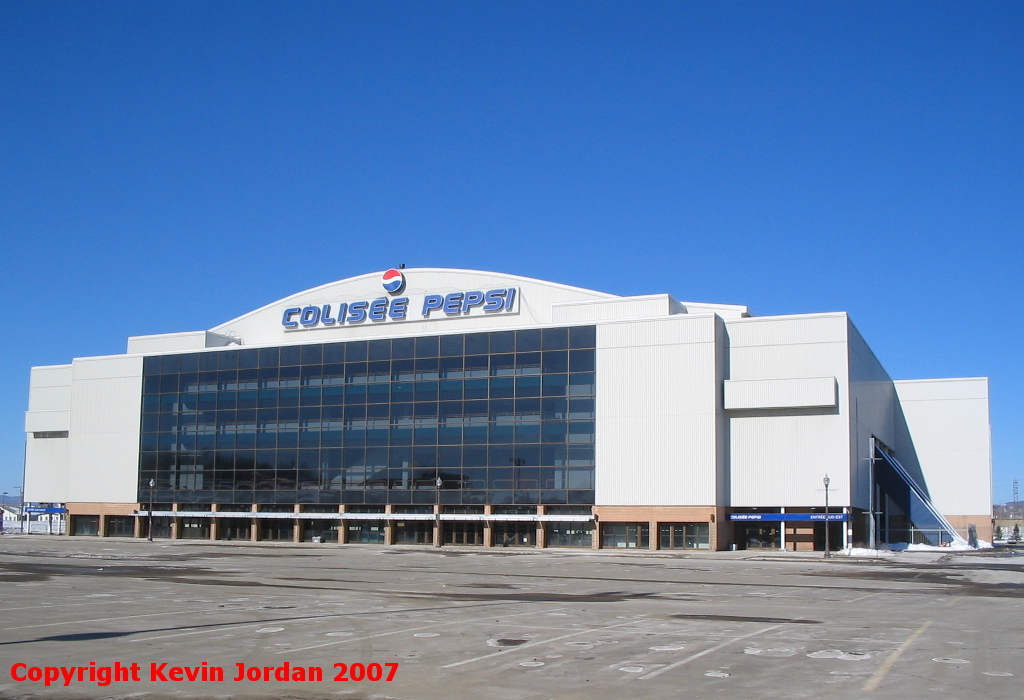 This is my original review based on my 2007 visit to the Colisée in Quebec. It was actually my second time there - I saw the short-lived Québec Citadelles AHL team play in 2001 - but it was the first time I saw it full. Regretfully I never made it back before it closed, but man, what an arena it was.

When I was a small boy, the twenty-one arenas of the National Hockey League ranged in age from younger than I am (the Saddledome in Calgary, built in 1983) to older than three of my four grandparents (the venerable, much-lamented Montreal Forum, built in 1924). Over the course of the past decade and a half, most of those have been replaced. One is still in use in the NHL (Madison Square Garden). Some of the newer ones are still in use for other things (the Hartford Civic Center is used by the AHL Wolf Pack). Some are sadly abandoned and locked up (the Buffalo Memorial Auditorium, still my favourite arena of all-time, was abandoned for over a decade before its ultimate demolition). Most of the old guard, though, are now rubble - Chicago Stadium, the Boston Garden, St. Louis Arena, Winnipeg Arena - all gone. And then there's the Colisée de Québec. Still defiantly open and hosting hockey in spite of its advancing age, the Colisée is truly the last of its generation. Once home to the NHL Nordiques, the ancient barn is today the largest purely junior hockey arena in the world, and is quite simply the best, most fun and most intimate large arena left anywhere. I fell in love with the place in 2001 when I visited for a nearly empty AHL game, and finally made it back in February 2007 to partake in a house filled with over 15,000 screaming hockey fans.

The Colisée sits on the city's Exposition Grounds, a few miles north of the St. Lawrence River and the cliffs and copper roofs of Vieux-Québec. The rink is surrounded by agricultural pavilions and parking lots, and is a long white building with a rounded barrel roof and a blue sign on the front naming the arena. There is also a large window on the front of the arena which hides escalators taking fans up to the upper deck. The walk from the car to the arena is a cold one in the middle of winter, with little around to block out the wind and snow, and therefore the warm lobby of the Colisée is a welcome destination. The lobby is dark, done up in dark golds and greys and is crowded on gameday with anxious fans. The ticket booths are actually set up in the middle of the lobby - the design is such that a low wall with a plexiglass top keeps the ticketless out. If you have an upper deck seat, you have your ticket taken at the entrance to the escalators that whisk fans upstairs. If you have a lower deck seat, once inside, the options are to go left or right, or to the middle to the team store. The store is incredibly tiny to the point that a security guard is needed on-hand to regulate how many people can get in for fire code reasons. The fourth option is to step through a narrow doorway and into the heart of the seating bowl.

The first view of the Colisée is a stunning view of a lost NHL. The place is absolutely huge, with 15,000 brightly-coloured seats extending into the heavens, yet at the same time it is intimate in a way that none of the new NHL entertainment centres are. A ring of red seats begin at the glass and extend about 2/3 of the way up the lower deck, with blue seats near the back. Meanwhile, an upper deck literally hangs overtop the blue seats, with a few small rows of greyish-white seats along the sides that extend high into the sky in the building's ends. The upper deck wasn't originally a part of the building - it was added in a renovation, as the alcoves into the seats are literally cut out of the roof. Seats were added wherever they could fit them in, and the shape of the roof is why the ends have so many upper-deck seats while the sides have so few. They were all old and still made of wood as of my last visit, and while reasonably comfortable by wood standards, leg-room isn't great. An older scoreboard still hung from centre ice as well, but I've been told that seats and the scoreboard have been updated since my last game there. Banners dot the ceiling, honouring the history of the Remparts, the Nordiques, and other teams including the old Québec Bulldogs, Stanley Cup Champions in 1911, and the Québec Aces, original team of Jean Béliveau and bearers of my favourite uniforms ever.

Navigating the Colisée is very easy. Ramps and escalators and stairs move between three concourses that extend all the way around the building. The concourses are so wide that you are almost certain to run into a group of kids playing an impromptu mini-stick hockey game, yet you won't trip over them as there is more than enough room to accomodate them. Historical displays dot the concourse, honouring everyone from the Nordiques to the annual Pee-Wee hockey tournament played in the building. Meanwhile, the bowl's entry and entrance system is the same as that at the old Buffalo Aud, and one that is almost never used anymore - the entranceways are staggered, so that you can reach a lower-deck seat from the loge concourse by going up, or from the mezzanine concourse by going down. It is such a simple and effective system that it pretty well goes without saying that no arena built today uses it. In the upper deck, on the other hand, you are pretty well cut-off from the rest of the building, and as mentioned, the entranceways were literally cut out of the roof, which means you step through an opening that is on at least a 45-degree angle. The steps down to your seat are so steep and the overhang over the lower deck so great that it's almost scary, but the view of the ice is unparalleled anywhere in junior hockey. The only bad seats are at the back of the blues, where the overhanging upper deck cuts off the view of the scoreboard.

Once the game begins, the atmosphere of the place really makes it stand out. Fans are crazy, shouting throughout the warmups and into the game itself. The announcer is reasonably good, but the only English you'll hear during the game comes from the crowd's frequently-heard "Go Remps Go" cheer. When the Remparts score a goal, the famous "Olé Olé Olé" song is heard in full-force from 15,000 throats. The scoreboard is old and video-less, but in a place like the Colisée, a videoboard would only subtract from the atmosphere. Peripherals are fine for an older building - washrooms are big and spacious, decent food is widely available for reasonable prices (including Québecois standbys like chiens-chaud and poutine). Employees are good too - the guy at the willcall ticket office couldn't find my tickets, but searched high and low for me and ultimately turned them up, all the while speaking a slowed-down French I could easily understand and putting up with my "good only by Anglo-Ontario standards" conversational French. The Colisée's usherettes didn't do much to stand out, but they didn't have to - they're all notoriously gorgeous, and rival PEI's for the best-looking in junior hockey.

The only distasteful thing at the building is something found all over Québec - the crowd talks non-stop throughout the national anthems. I myself prefer the European custom of only playing the anthems at international games - I think that playing it before every game is an outdated World War II tradition that cheapens the sanctity of the anthem by having it sung by wannabe divas and kindergarten choirs - but when the anthem is played, you damn well stand at attention. It's annoying, but to single out the Remparts fans isn't exactly fair, since I've encountered it in other Québec-based QMJHL barns I've been to.

The Colisée is the last old-guard NHL arena still in operation, and is still in excellent shape in spite of its age, now on the far side of 65. The atmosphere is incredible, the views terrific from any seat in the house, and 15,000 fans at any junior game makes it a big event. It is one of my favourite arenas anywhere in the world, and if you love hockey, you owe it to yourself to partake in a game at the Colisée; to see big-time hockey the way it used to be once upon a time. Fifteen years isn't that long ago, but in that time every large pre-1960 arena in North America has been lost except this one. Go there, man. 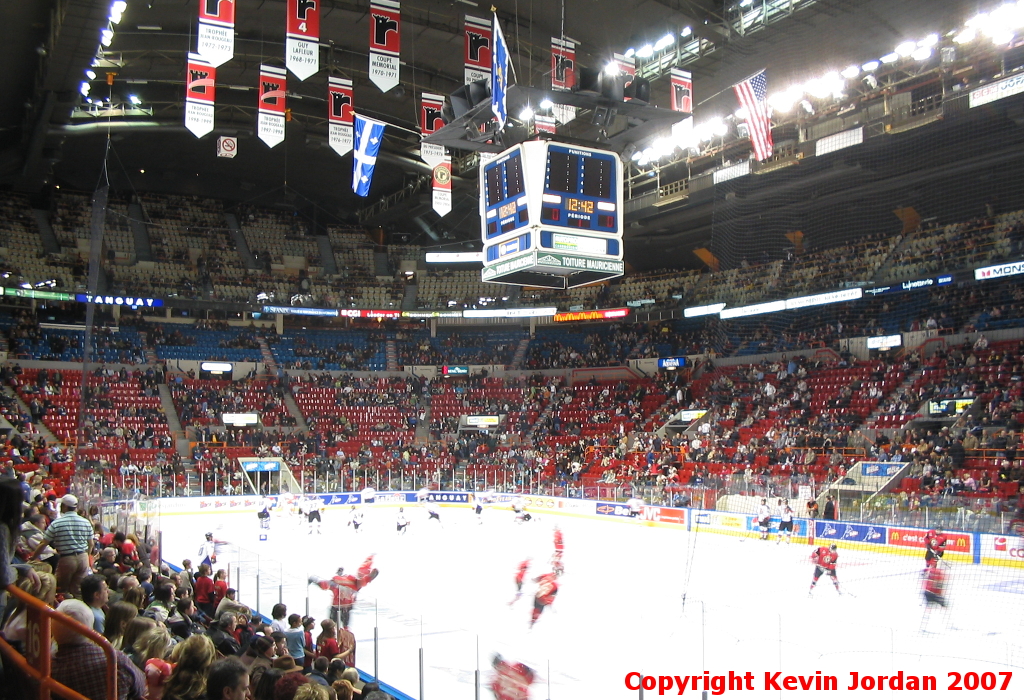 What's the Arena Used for Today?
The Colisée's last hockey event was the 2015 Memorial Cup final. The arena stayed open for concerts and other events during the summer of 2015, and finally closed for good with a Metallica concert in September 2015. The city of Québec dithered on the idea of demolishing the building for six years, and in 2021 they announced that the Coliée would be converted into a centre for emerging sports, with space for rock-climbing, skateboarding, and BMX biking. If the project goes forward, construction is expected to begin in the fall of 2023 for completion by 2025.