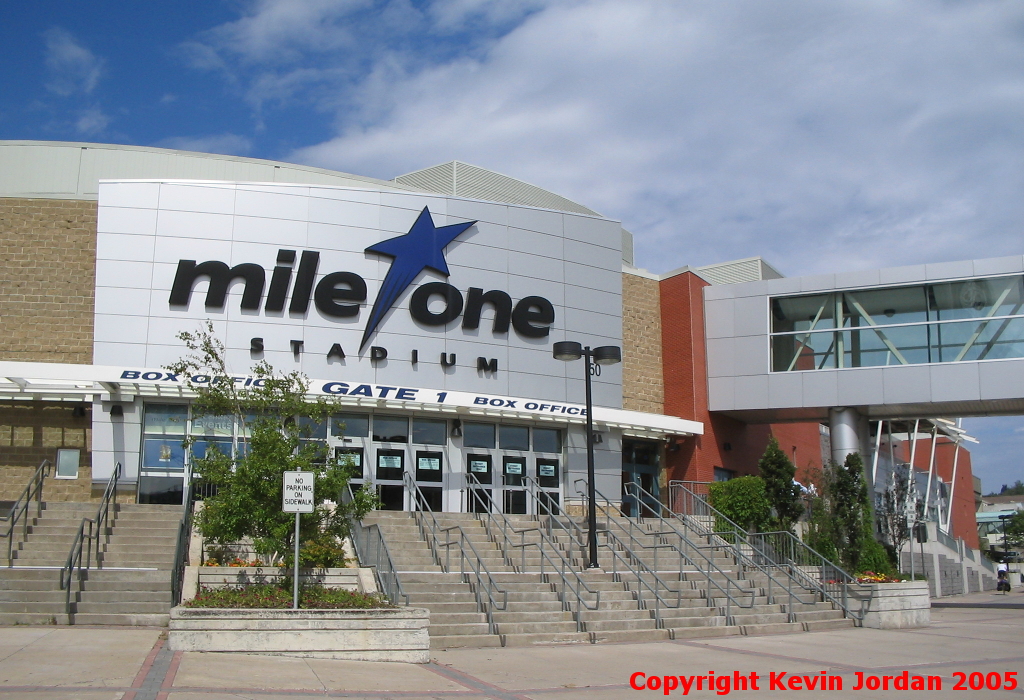 The St. John's Fog Devils only existed for three short seasons. In the grand scale of things, even if the Q does someday return to the Rock, the Devils will only rate a passing mention in the league's considerable history. But for me, it's personal, because I was there for that first season. The year after the team that I had watched since early childhood won their first league title and Memorial Cup, I moved away for a year to an amazing, beautiful place and watched a team with no history struggle for competitiveness, and in so doing, fell in love with the Q in the same way as the OHL. Now, the Devils are gone, having never been really given a chance to survive in the first place, and a small part of me has gone with them. I've decided to keep this writeup largely the same as it once was, because although I've witnessed franchise relocations in the past and have been able to empathize with the people of places like North Bay, this is the first one that has ever hit home. I will remember the Fog Devils, and I hope that at some point in the not-too-distant future, a new team will come back and the QMJHL and SJSE will actually give them a fighting chance at survival. It's a sad comment that an average attendance of over 3,000 wasn't enough due to the economic structures of the QMJHL and the petty spitefulness of the people that run Mile One.

Easily the most isolated major city in Canada, the Newfoundland capital of St. John's is a unique place that I was proud to call my home for a year in 2005-06. Nestled in rolling mountains around a natural ice-free harbour, the city has a culture and a feeling all its own, from the colourful clapboard row houses on the edge of downtown to the fishing boats anchored near Fort Amherst. In a hockey sense, St. John's was granted an AHL team in 1991 during the league's aggressive expansion to Atlantic Canada, and in spite of the ramshackle nature of the old Memorial Stadium, the city and the island both took pride in being host to the second-best professional league in North America. Later on, as the AHL began its exodus away from the East Coast and the Q moved in, St. John's was the last stubborn holdout. The Baby Leafs were still supported passionately, and there was a feeling among the people of the city of "We'd better support this, or else we're never getting it back if it ever leaves." Yet, in spite of building the best arena in Eastern Canada for the team, the Leafs packed up shop in 2005 anyway, as the costs of operating a team so isolated from the rest of the league were building up, and MLSE thought they could make a go of the AHL in the RICOH Coliseum in downtown Toronto. The Fog Devils were born over that summer as a replacement, and debuted in September 2005, moving right into Mile One Stadium and seemingly passing the Leafs in the night.

Mile One Stadium (since renamed Mile One Centre) is located in downtown St. John's beside the city's monstrous concrete brutalist City Hall. Outside City Hall is the marker from where all distance points in Canada are measured, hence the name, Mile One Stadium. It's a new building with postmodernist architecture in steel and red and tan brick, and is quite attractive with its gigantic marquee sign. The arena is also a short walk away from the legendary George Street, where there are more pubs per kilometre than anywhere else in North America. Mile One is right on the fringee of St. John's lively and colourful downtown, and also is a short distance from St. John's harbour and the Atlantic Ocean.

The arena has one main entrance where there are a series of ticket booths, and once you get fully inside you find yourself in a spacious concourse with a war memorial in front of you. The concourse stretches 360 degrees around the building, and is lined with the usual concessions and such. The team store is also near the front door, and they sell some wonderful devil-based souvenirs, including giant foam fingers that, instead of the traditional "number one" gesture, are done in the "rock on" salute you see at concerts. Brilliant. Once you enter into the seating bowl, a modern, somewhat faceless new building stares back at you. It's very similar to the OHL building in Mississauga, with about 6,000 maroon seats in a steeply-raked pattern. There are suites and a restaurant stretching around the top of the building, and the press box hangs above the seats on one side. The press box is named for Bob Cole, the legendary Hockey Night in Canada announcer, who was born and raised in St. John's and still lives in nearby Topsail.

Once the game gets going, Mile One quickly elevates itself above Mississauga - it's probably the best new mid-range arena I've been to. The scoreboard features a full video board and is used well. Promotions don't distract from the game. The sound system is excellent without being ear-shatteringly loud. Music selection is great, a combination of traditional hockey songs, 1990's chart-toppers (they played the Refreshments one game!), and Newfoundland sea shanties. There is a pub along one side of the building, called Caps after the old St. John's Capitals hockey team, which features a fair amount of Newfoundland hockey history on display. Atmosphere, that elusive quality in so many new buildings, is terrific as well. St. John's hockey fans are loud and passionate and cheer as well as any in the CHL.

The main flaw at Mile One that first year was fixed by the time the team left. The group that owns Mile One and the group that owns the Fog Devils were involved in a well-publicized dispute over rent and a number of other things in the off-season before the first year, and as a result, the Mile One people didn't really do anything to prepare for the Q's arrival. All of the arena signage and such still had the blue Baby Leafs logo on it, and there were displays around the arena showing great moments in St John's Maple Leaf history. The team store was still seemingly called "Leafwear" even though the sign has been covered up. Even the signs at the ticket window still had that blue Leaf on them. In the pre-season, it felt like the Fog Devils were borrowing the building for the night and had to return it in good condition, but even as the team made the rink their own, the ghosts of the AHL still had a hold on Mile One and the QMJHL never really settled in.

By the end, the people of St. John's had begun to take to the Q, but it wasn't quite enough. Brad Dobbin's marketing team did a commendable job of getting the team into the community, but as of when I left, it seemed like they still had an uphill fight in front of them. I spent the year living on Prince Philip Drive in St. John's and hiking down to games downtown in all weather. After the previous year in London, in which I was planted smack dab in the middle of a giant bandwagon that careened through a 31-game unbeaten streak, the greatest regular season in junior hockey history, the OHL title and the Memorial Cup, to then switch to following the Fog Devils the next year felt like starting over. I was the only seasoned junior hockey fan in the crowd, and I felt like I was the only one who understood how great the on-ice product was. It felt fitting at the time - I followed the Knights for 18 years before I got to see them win, went out on top, and then started again with a new team. It's a shame they couldn't make more of a go of it.

The Fog Devils were doomed from day 1, between a ridiculously hefty travel subsidy that they had to pay to incoming teams and the worst lease in the CHL. But even so, Newfoundland's sports culture is insular, and people there in general seemed more interested in watching provincial senior hockey than the best junior-aged players in the world. In spite of all of that, the Devils were still drawing over 3,000 fans a game when they left and still losing money hand over fist - a testament to just how bad the lease and league arrangements were. The attendance still gives some hope, though, that things can maybe work in the future if done properly.

The Rock is still in my blood, and I want to go back more than I can tell you. Newfoundland has a habit of hooking outsiders and making them fall in love with the place. People in St. John's didn't realize what they had when they had it. Now that it's gone, let's hope they start pining for the best hockey in the world again and make a concerted effort to get it back, properly this time.

Inside Mile One Stadium 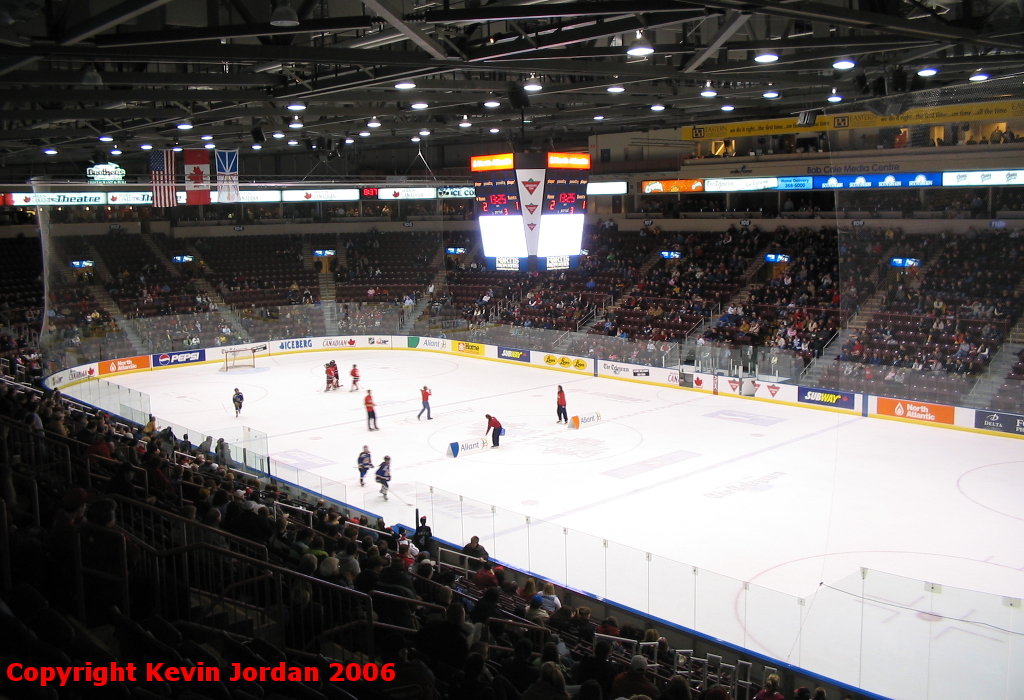 What's the Arena Used for Today?
Mile One Centre today is home again to the ECHL, with the Newfoundland Growlers taking up residence, once again giving the arena an affiliate of the Toronto Maple Leafs. The Herder Cup (provincial senior hockey championship) is also held in the building each year. Meanwhile, the Fog Devils moved first to Verdun, and are now the Blainville-Boisbriand Armada.