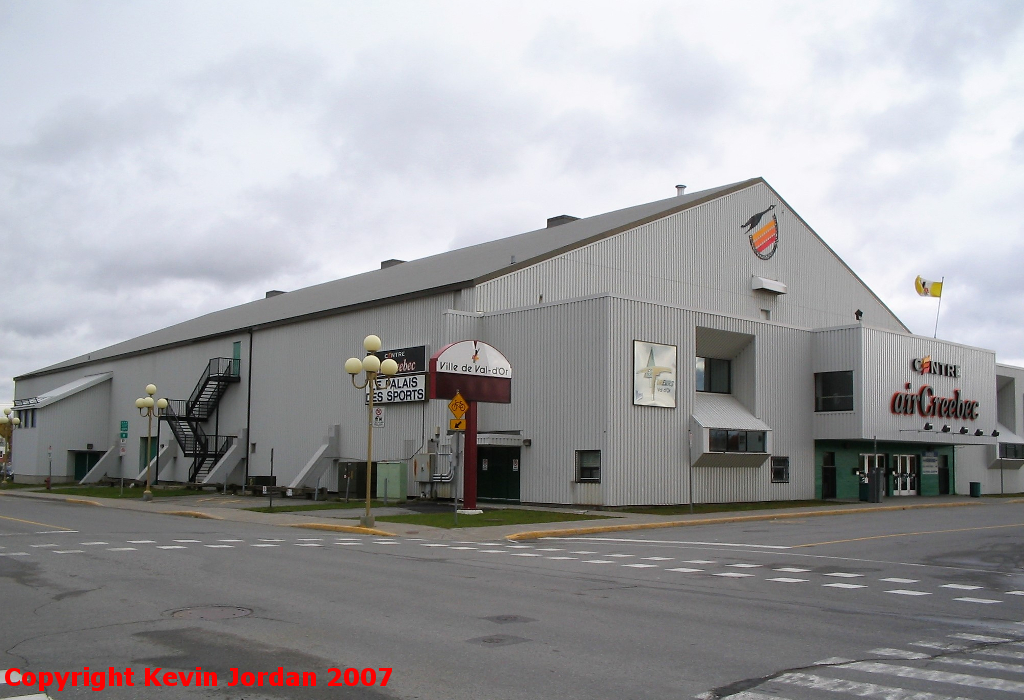 One of the great pleasures of the QMJHL, at least in comparison to the rest of the CHL, is the juxtaposition of cultures between the two solitudes within Canada. Not only do the players on the ice often have to adjust to life in a foreign place, but for us, the fans, we get the experience of witnessing the sport in different contexts. The passion for the game is unchanging no matter where you go, but the culture is completely different, and it is the cosmopolitan flavour of the Q that in my experience is the very thing that makes it so unique and entertaining. Another factor is at work in Val-d'Or, though - here, in a tiny drinking town with a mining problem in northwestern Quebec, the third, often unfairly-overlooked solitude makes an appearance in full force. The local Crees and Algonquins are everywhere both in town and at the rink, and the unique, passionate Aboriginal flavour in Val-d'Or is one that I have not experienced anywhere else.

The drive into Val-d'Or is one through a landscape that is both virgin and scarred from nearly a century of extracting wealth from the ground. Abitibi-Témiscamingue is home to over 116 mines, and you never quite lose sight of that as you approach town on the Trans-Canada's Route du Nord. Val-d'Or feels like a frontier town in every sense of the word, with a main drag populated by shops and saloons catering to an outdoorsy life, and a designated snowmobile route whipping behind the buildings just north of the strip. Another few blocks north of there lies the Centre Agnico Eagle (formerly the Palais des Sports) and the neighbouring Kiwanis rink - the town's only hockey arenas. The Centre was built in 1949 and is covered entirely in white aluminum siding to keep out the harsh elements. It is a tiny-looking building wedged onto its city block, with a high, arched roof and a few emergency fire escape-style stairs descending to street level. A baseball diamond lies across the street, and the rink sits essentially on the line between the commercial strip and the houses to the north.

The Centre's main entrance faces the street, and a huge marquee announcing the building's name is mounted above an understated bright green entrance. The lobby immediately inside is clad in the same green and white, with a few tiny ticket booths to the side and photos of the entire team displayed. From there, you enter a long hallway running directly underneath the grandstand, which includes team photos from throughout Foreur history and a door with a grate on it that leads directly to the tiny referee dressing room (and thence the ice). Twin staircases at either end of the hall lead up, past small windows looking outside, to the main arena bowl.

Words couldn't possibly do any justice to the intimacy of the Palais in Val-d'Or. One single narrow concourse extends around the ice, with six rows of ancient wooden bench seats painted in deep green, bright yellow, and black. The first row of seats actually begins at the top of the boards, which means that if you're in the front row, your feet are level with the beginning of the glass. The angle of the seats is impossibly steep. You truly feel like you're clinging to the wall with velcro, and hanging directly over the ice. In the CHL, only the old St. Mike's arena was possibly as intimate, but that was a 1,600-seat junior B arena, not a full-sized and viable junior barn. The top concourse doubles as standing-room, and in the one end of the rink there is a small glassed-in alcove area which contains more standing-room, a trophy case, a bar and a tiny souvenir kiosk. A suite level extends all the way around the ice, with only a few gaps. It's obviously an addition from a later renovation, but the effect works as the suites also hang nearly over the ice, and are dotted with all the logos from the rest of the Q. The arena is so truly tiny inside that there really isn't what you'd call a Zamboni garage - between periods it's just parked in a little alcove cut out of the stands.

The little extras in Val-d'Or make for a great experience. Giant air compressors sit up near the ceiling, but they are hidden by equally giant "FOREURS 1993" signs which overhang the ice and refer to the year of the team's founding. The scoreclock works great, and is, believe it or not, an analog clock. The numbers look digital, but they're not electronic or LED, they're mechanical. It's unspeakably old-school. The ceiling itself is coated in silver cladding, which matches the bright colours of the seats, the green and white walls, and the brilliant white of the ice in making the place sparkle. The glass is low. Washrooms aren't nearly plentiful enough, but for old washrooms, they're clean enough. Pictures of former Foreurs that made the NHL are all over the walls, along with other memorabilia from Val-d'Or's hockey history.

Gameday presentation in Val-d'Or is good. The music is subdued enough, and occasional organ music adds to the atmosphere. The announcer is all right - I generally find it easier to ignore French announcers than English ones, but there was never anything that seemed outwardly annoying, and in fact the announcer sits in the penalty box all game as there's not enough room in the press box! The mascot (I have no idea what it was supposed to be) was also subdued, and barely visible all game. Foreur goals are marked by a massively loud train whistle - I couldn't spot it in the rafters, but it wouldn't surprise me if it was a real one rather than a recording.

As mentioned off the top of the review, Aboriginal culture permeates the building around the edges. This isn't the tomahawk chopping of the Atlanta Braves, or the racist Chief Wahoo caricature of the Cleveland Indians, it's instead just a place where lots of real native people live and work and watch hockey. Outwardly, Val-d'Or is in a French-speaking province, and the game is presented in French. But you're just as likely to hear Mr. Tapiatic's native-accented English spoken in the stands as M. Tremblay's français. Even the building's title sponsor is a native-owned airline that serves remote outposts in the far north. This also wasn't the cheerfully bilingual atmosphere in Bathurst, either - instead it was an outwardly French building with a lot of friendly English-speaking people in the stands. All three solitudes are on display here, but the inspiring thing of it was just how passionate all three were about the Foreurs. Even though I was there in late October, the crowd noise was still raucous and the passion for the the team was palpable.

One last anecdote will perfectly illustrate what kind of place Val-d'Or is. In many buildings in the French-speaking part of the Q, the locals will talk through the national anthem, or sit, or otherwise show a nationalist disrespect. In Val-d'Or, the anthem was sung beautifully, half in English, half in French, by an Aboriginal tenor with the unlikely name of Mark Hunter. The people in the stands, English, French, Cree, Algonquin, all stood at attention. It was inspiring to see in Quebec, and it set the tone for the game. Between the intimacy of the building, the atmosphere, and the friendliness of the locals, the Centre Agnico Eagle instantly joined my list of favourite buildings in the CHL. 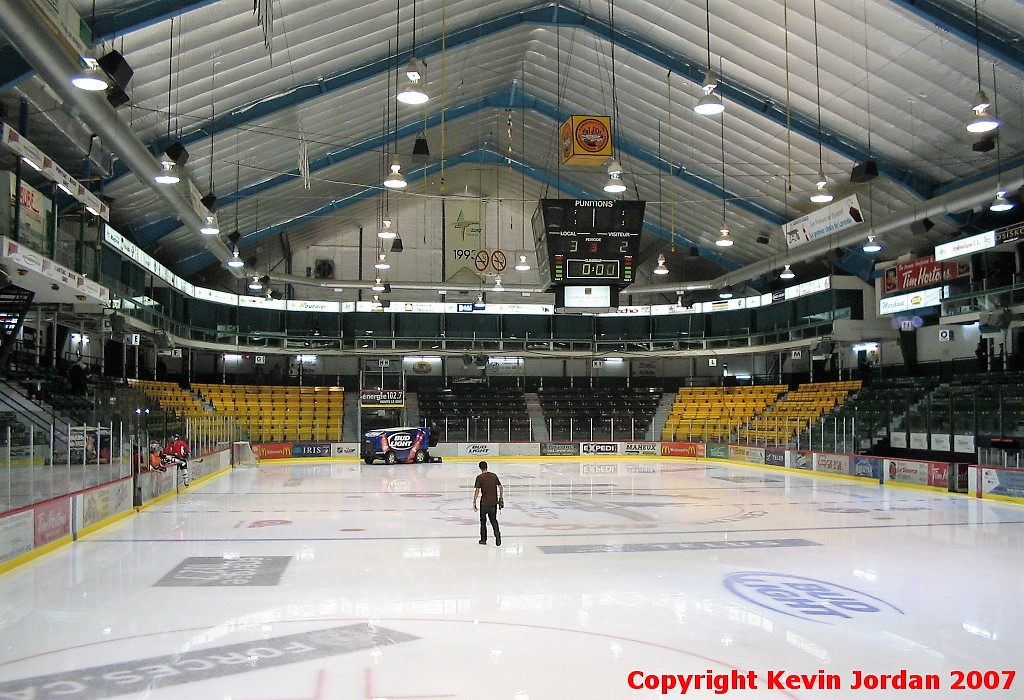 Future Developments
There are no plans to renovate or replace the Centre Agnico Eagle.


Franchise History
The Foreurs franchise was granted as an expansion team in 1993-94. 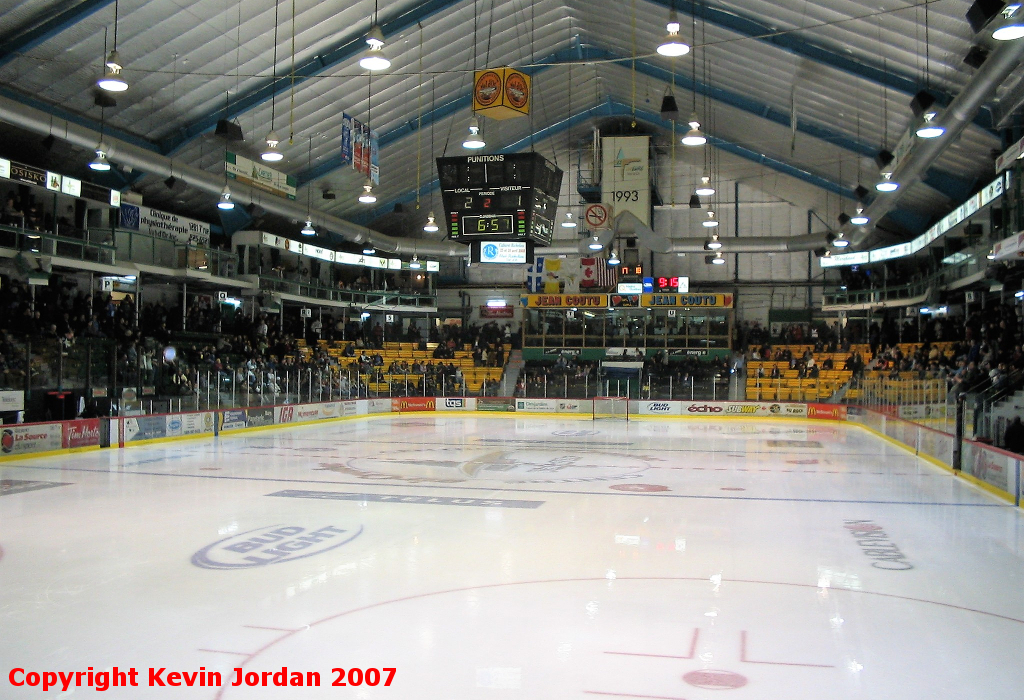