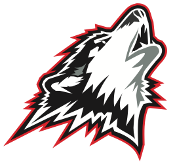 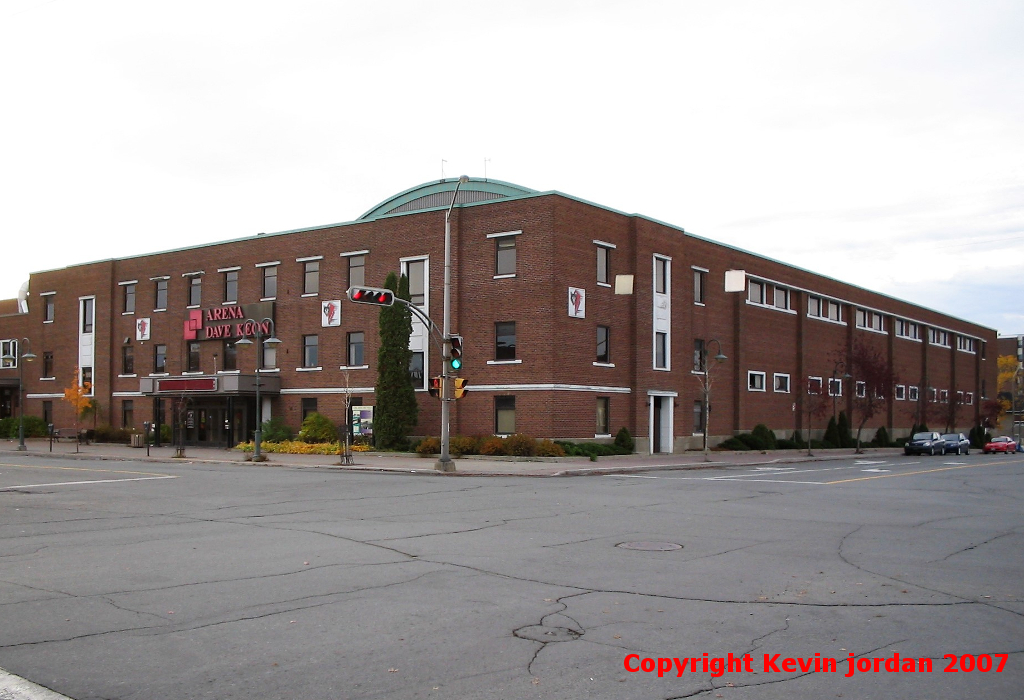 It is a somewhat interesting observation that the history of the Rouyn-Noranda Huskies franchise, who were once the legendary Montreal Junior Canadiens, dates back almost as far as the history of the city of Rouyn-Noranda itself. Founded in 1926 around a copper-mining settlement, until 1986 the two towns were separate entities. Rouyn is the larger, southern half of town, and is constructed around a small but lively downtown area. The Aréna Iamgold at Centre Dave-Keon is in the smaller, economically-depressed Noranda half of town, which is absolutely dominated by the gigantic Horne smelter a few blocks away - the largest smelter of precious metals in the world. The smelter reminded Chris, my travelling companion, of the Axis Chemical Factory in the original Batman movie. Empty storefronts and run-down small houses surround the arena, as well as something next door you don't often see in Quebec (even after the Quiet Revolution) - an abandoned church. The arena itself, which includes an attached curling rink, was built by the Noranda Mining Company as a gift to their company town in the aftermath of the Second World War. It was originally known as the Noranda Recreation Centre, but was renamed for local boy and Hockey Hall of Famer Dave Keon in 1989, and then renamed again because money a few years back.

Arena Dave Keon, as I still like to think of it, is located on a street corner across from a gas station and the town's fire station. It's a stout brown-brick building dotted throughout with windows, and blends well into the neighbourhood. The cylindrical roof is bright copper green, but you have to stand well back to see it, as it begins a way back from the edge of the roofline. A large red sign announces its name, and the front of the building also has Huskies and municipal logos. Inside the arena's front doors, there is a small lobby with ticket booths that lead into a long perpendicular hallway painted in a dark red and black. Similarly to in Val-d'Or, twin staircases at either end of the hallway lead up to the main concourse of the building. You also have the option of continuing into a little alcove where the Huskies set up a small souvenir kiosk as a compliment to their (tiny) souvenir window upstairs, or down long hallways leading to the dressing rooms.

Once all the way up the stairs, you find yourself in a reasonably wide concourse overlooking a small seating bowl featuring seven rows of seats all the way around the rink. The concourse has pictures from Rouyn-Noranda's hockey history all over the walls, which is a nice touch. The seats are all formed wooden originals and surprisingly comfortable, and are painted in orange, silver, blue and red. Finding your seat in Noranda can be a chore, though - for some reason, the section numbers start at 30, and seats increase in numbers by twos in pairs and impairs, or odds and evens. As a result, you could easily, as we did, find yourself with section 60, row E, seats 13 and 15, which happen to be right next to each other. Bizarre! Views are pretty good, although you're not clinging to the wall like in many other older arenas; in fact there's lots of leg room and the rake of the seats is surprisingly shallow. Private suites run down both sides of the arena and are obviously an aftermarket addition, as they hang obnoxiously over the seats below - not blocking the views, just hanging directly overhead. They're not guarded after the game, either, which means you can go up and have a look, which is kind of nice.

The rest of the arena is pretty straightforward - there is a small but functional clock overhead, and a high, cylindrical roof covered in metallic silver cladding. Washrooms are clean enough. On the front side of the arena behind the goal there is a cafeteria-style area with glassed-in standing room similar to the setup in Val-d'Or, where the main concession and bar is located. Rouyn's bar sells hard liquor in addition to beer and coolers - there's a pretty full setup of liquor bottles behind the counter, and if you ever dreamed of being able to watch junior hockey with a Manhattan in hand (and who among us hasn't?!), Rouyn is your kind of place. The only downside is that those concessions are essentially the only full-service ones in the building (there are a few beer and pizza stands, but nothing else so comprehensive), so every intermission there is a run on them worthy of a foundering bank in the Depression. Stay out of the way if you value your life. One last thing to mention about the cafeteria area as well - the trophy case features history dating back to the team's half-century in Montreal, including team photos. It's well worth having a look. The best and most unique feature of the building occupies the other wall in the other end of the arena - it's a menacing-looking pair of eyes, painted directly onto the wall. At select moments during the game, a strobe light illuminates them to a very cool effect.

Gametime means that it's time for the speakers to go nuts - the sound system is all right, not great, not terrible, but it's LOUD. Music selection is mostly heavy rock and metal, which I suppose fits the profile of small, middle-of-nowhere towns being into death metal and such, but at that volume it's really annoying and distracting. The goal horn is equally loud, and drowns out all crowd noise at every goal. The Huskies' mascot is a pretty good one by mascot standards; entertaining in the spirit of the San Diego Chicken or the Phillie Phanatic, but for some unknown reason it's not a husky. I don't actually know what it is, but my guess would be that the team bought it second-hand at a going-out-of-business sale from another sports team, probably called the "Wildcats" or "Panthers" or something. Oh, and for some reason he's called "Lappy". (I'm told he was named for either locally-born Hockey Hall of Famer Jacques Lapierre or his brother Gilles.) The crowd is pretty good in Rouyn-Noranda - about what you'd expect from an ancient rink in a small town. They're not the loudest crowd in the CHL, but the atmosphere is pretty decent.

Arena Dave Keon is one of the few remaining CHL arenas under 3,000 capacity, and it feels like it. While it's spacious in places, you still never really lose sight of the fact you're in a small arena. The building was quite run-down in places when I visited in 2007, with the wear and tear showing in many places, including paint peeling off the walls in spots, but the rink was comprehensively renovated in 2011, so I imagine that's no longer the case. It's also got the requisite quirks of any old building, including a penalty box setup I haven't seen anywhere else. Instead of box, timekeeper's bench, box like everywhere else, in Noranda it goes box, box, timekeeper's bench. As a result, only a low pane of glass separates the two boxes, and I would imagine that brawls have happened before as a result of the weird setup.

The low capacity, high-energy crowd, and run-down charm lends a very cool old-school atmosphere to attending a Huskies game. Only 40 km from the Ontario border at Virginiatown, the Huskies draw in a fair number of supporters from nearby Kirkland Lake. It's still a very French atmosphere in town, but English fans fill the stands too. While the team doesn't go out of their way to accomodate them, Noranda is just like Bathurst and Val-d'Or in that an Anglo can feel welcome there in his own language. The trip up to Abitibi is a legendary one for any away fan, but rest assured, you won't be disappointed if you do it. Both cities and both arenas have their own quirky charm, and the hockey, as ever in the CHL, is as good as it gets. 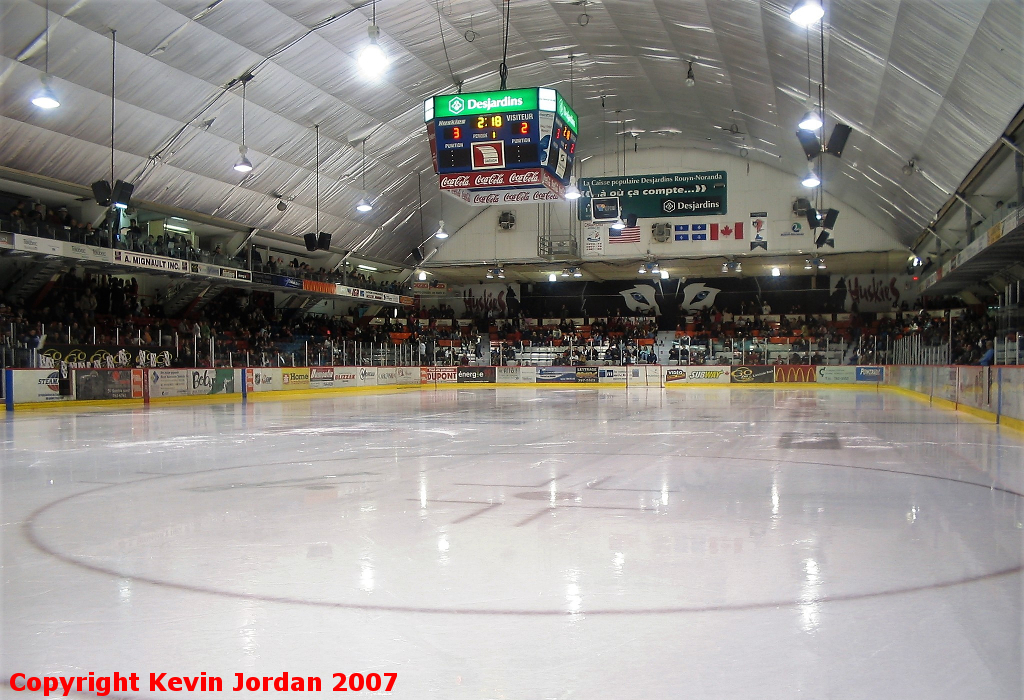 Future Developments
There are no plans to renovate or replace the Aréna Iamgold.


Franchise History
The Rouyn-Noranda Huskies are the same franchise that was once the legendary Montreal Junior Canadiens. The team was organized before the Second World War and played for decades out of the Montreal Forum. They played in the OHL between 1962 and 1972, and upon joining the Q in 1972, became known as the Montreal Bleu, Blanc et Rouge, and later, the Montreal Juniors. As the team's popularity faded in the 1970s, they played a couple years out of the Paul Sauvé Arena in Rosemont, and another full season in the Maurice Richard Arena, but in 1982, the team finally gave up and moved to suburban Verdun. The team played in the Verdun Auditorium from 1982 to 1989, and finally left the Montreal area for good in 1989, moving to St-Hyacinthe to become the Laser. The franchise moved to Rouyn-Noranda in 1996, joining Val-d'Or in the Abitibi-Témiscamingue region. The team is currently owned by a collection of local businessmen, so it seems quite unlikely they will be leaving northern Quebec anytime soon. 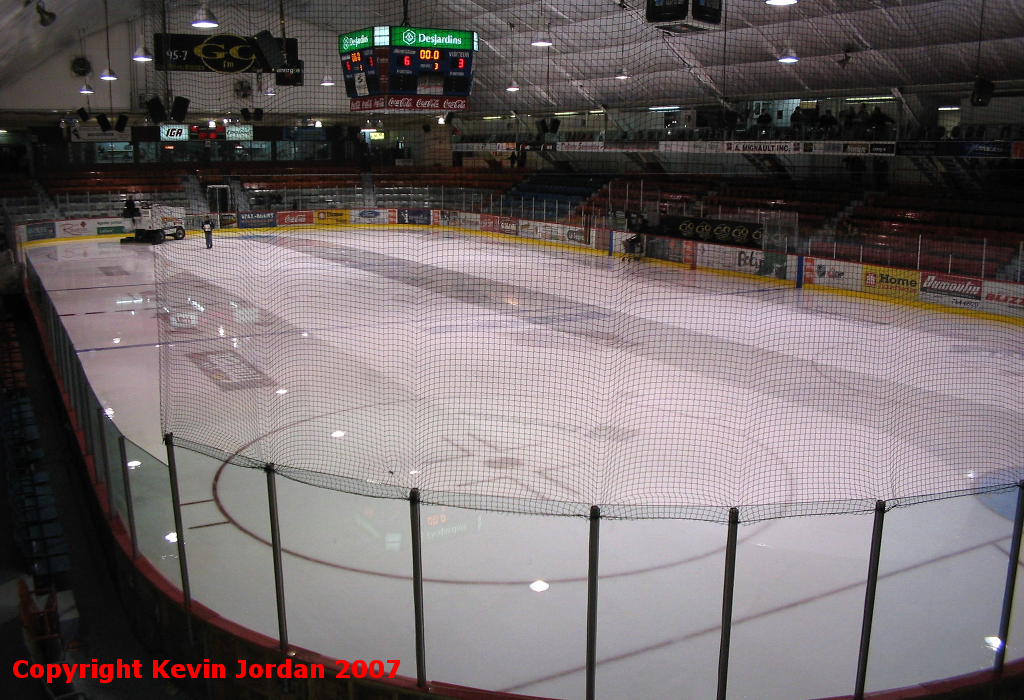