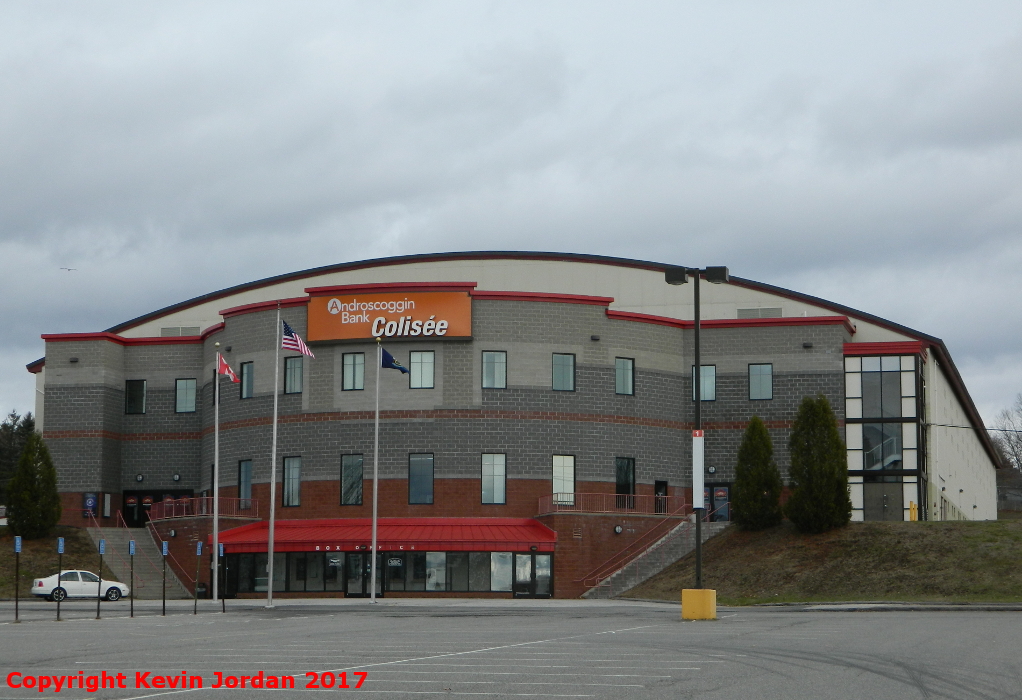 The QMJHL's second foray into the United States was vastly more successful than the first. Whereas the Plattsburgh Pioneers lasted a mere 17 games before folding, the Lewiston Maineiacs overcame resistance and distance to not only survive, but thrive. A league championship in 2007 was the team's high point, but they did well enough that many observers, myself included, expected them to become a permanent part of the league going forward. Alas, it was not to be. The Maineiacs never had local ownership, and when the Quebec businessman who owned them wanted out, the league chose to fold them and reincarnate the franchise back in Sherbrooke, from whence they'd come in the first place, the following year. But once still expects that the Lewiston/Auburn market would be amenable to the Q if they ever returned; among other things, the arena in which the Maineiacs played is still standing and capable.

Lewiston is a hilly city in Central Maine with the same down east feel of a lot of the Canadian Maritimes and New England, full of clapboard houses and church steeples. The former Central Maine Civic Center sits in a residential neighbourhood near downtown, with a ball diamond and soccer fields adjacent with a huge parking lot. The building has a new facade glued on the front with team offices and a new box office, but from the other three sides the rink looks tired and old.

Once inside, the arena maintains its old feeling. The concourse is a U shape underneath the seating area, with a full-sized lobby behind one of the nets but only small and narrow hallways down the sides. It's a double-concourse, O on top of a U design much like the London Gardens or Oshawa Civic Auditorium, except that the second concourse is down by the glass in front of the seats instead of at the top behind them. The seating bowl consists of four grandstands full of old, original wooden chairs painted uniformly blue. In the corners, newer seating fills them on a sharp 45 degree angle; I'd wager that originally the corners were just open to the concourse.

I visited the Colisee on a Sunday morning in late November as it was open for public skating, and the first thing I noticed upon entering was the cold. Now, I visit a fair number of arenas, and I don't recall ever being in a spectator arena that was kept as frigidly cold as the Lewiston Colisee. The other thing that I'd never seen before that the Colisee had is a scoreclock that was mounted at a 45 degree angle relative to the ice. It's an older clock, no video board, and very strange to see!

The Lewiston Colisee is old and worn out, but there's greater things at work there. It reminded me of the Kingston Memorial Centre or one of the older buildings in Quebec; a rink with very little in the way of amenities and such but with character. I'm sure the atmosphere would have been good for the Q too; with a full house and no sound muffling surfaces, the place would have rocked. Furthermore, the history of the place is on display - the famous Ali-Liston fight in 1965, the one with the famous Neil Leifer photo that was named the century's greatest, was at the building. The reason why the Heavyweight Championship of the World was fought at a small arena in Lewiston, Maine has to do with boxing's arcane rules and Ali's political ban in the mid-60's, but I was pleased to see the Leifer photo front and centre at the rink. The only sign of the Maineiacs, though, was the old score-o sign from intermissions tucked in a corner - the 2007 Q championship banner was nowhere to be seen.

Overall, the Colisee is still in decent shape, and if the Q ever wanted to try again, this time with local ownership, there's no reason why it couldn't succeed. Lewiston might be three hours and change from their closest Q rival, but the CHL is stronger with American teams, and the arena there is larger and in better shape than some that still exist in the QMJHL.

Todd Faber says: The Androscoggin Bank Colisee (formerly the Colisee Lewison, the Central Maine Youth Center, and later Central Maine Civic Center) was constructed in 1958, on the former site of St. Dominic Arena, the home ice for the St. Dominic's High School team which was destroyed by fire two years earlier. After much debate, the decision was made to rebuild with the money raised by a combination of insurance money and privately donated funds. As such, the arena is in a residential area of the city without the perks of a downtown area such as restaurants and motels, although those are available within a short drive.

The arena was built for, and remains the home of, the Lewiston and St. Dom's high school teams, but later hosted concerts, exhibitions by the Montreal Canadiens & Boston Celtics, and its crowning moment, the May 25, 1965 Muhammad Ali/Sonny Liston Heavyweight Championship fight. It was also the home of the NAHL's Maine Nordiques between 1973-77 as well as other community semi-professional teams.

Sadly, in the years following the Nordiques' demise the arena fell into a state of disrepair due to lack of maintenance. The dressing rooms, for instance, had but one showerhead and a (usually broken) toilet. Rumblings were heard about possibly razing the arena when the transfer of the Sherbrooke Castors was approved early in 2003. Renovations were quickly put into place, including a new home dressing room and weight room, renovated rest rooms, new scoreboard, rebuilt/repainted seating, and concession and souvenir stands. When the puck dropped on September 19, 2003 versus the Drummondville Voltigeurs, the project was still just halfway done.

When you enter into the arena, you do so either thru the ticket window at the bottom of the atrium and up the inside stairwell or elevator or by one of two outside stairways. Season ticket holders have a separate entrance available in the smaller VIP lot, as they bypass the public parking and go around the curve to the prepaid lot. It's also quicker to get out, but if you're looking to get back onto Pleasant Street, you'll be behind the masses coming out of the public lot so waits can be between 10-20 minutes to get back to the main streets. The public lot is large, lit, and costs $3.

The seating area consists of ten rows of seating in the four-corner design popular in the late 50s-early 60s era. The seats themselves are the originals, each one taken out individually and sanded and re-painted MAINEiacs blue. Some actually come from the old Memorial Stadium in Baltimore and were installed when that facility closed. They're quite wide and comfortable. Legroom is adequate. Note that once you enter, you're at row one as the seats go upward from slightly above ice level. Therefore, row A is ideal as you can see everything quite nicely and have the most legroom at your disposal. One can walk a full 360 degree circle around the perimeter of the rink.

Outside the seating area is the main concourse, with hallways on each side. Before the addition of the food court, it was quite reminiscent of the Soo Memorial Gardens with a handful of stands as you enter. Therefore, lines got quite long and congestion was frequent. With the addition of the food court, the problems were relieved and lines were shortened. Beer & wine are served, as well as a "Monster MAINEiac" for $4 which is a martini mixed with an energy drink. Red hot dogs, a Maine staple, are also served, as well as poutine.

The Colisee is a wonderful mixture of old and new. It has a few of the luxuries of a newer building (many, if you are privileged to have VIP seating) but still has that old-time arena feel commonly found in the older rinks of the QMJHL. Certainly, there are obvious flaws that need repair (most notably public restrooms) but not enough to deter one from the experience. Colisee Lewiston is certainly off the beaten path for visiting fans, but well worth a visit. 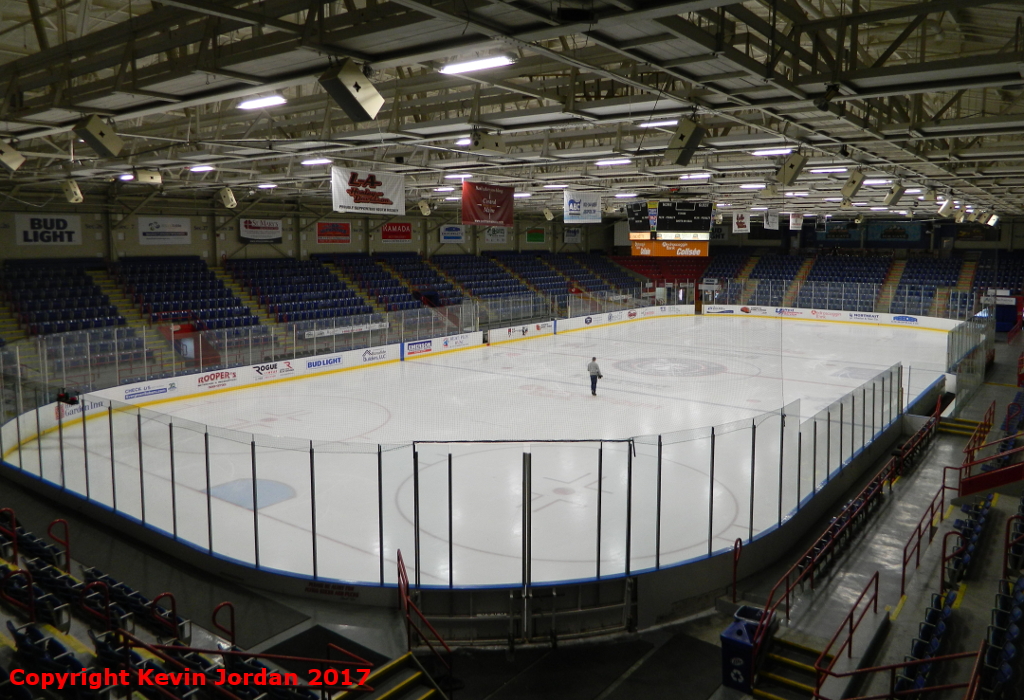 What's the Arena Used for Today?
After the Maineiacs folded, the arena mostly sat empty until 2015, when a Tier 3 junior team moved there. Today the building is home to the Lewiston-Auburn Nordiques.