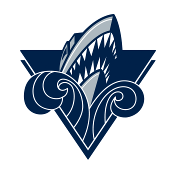 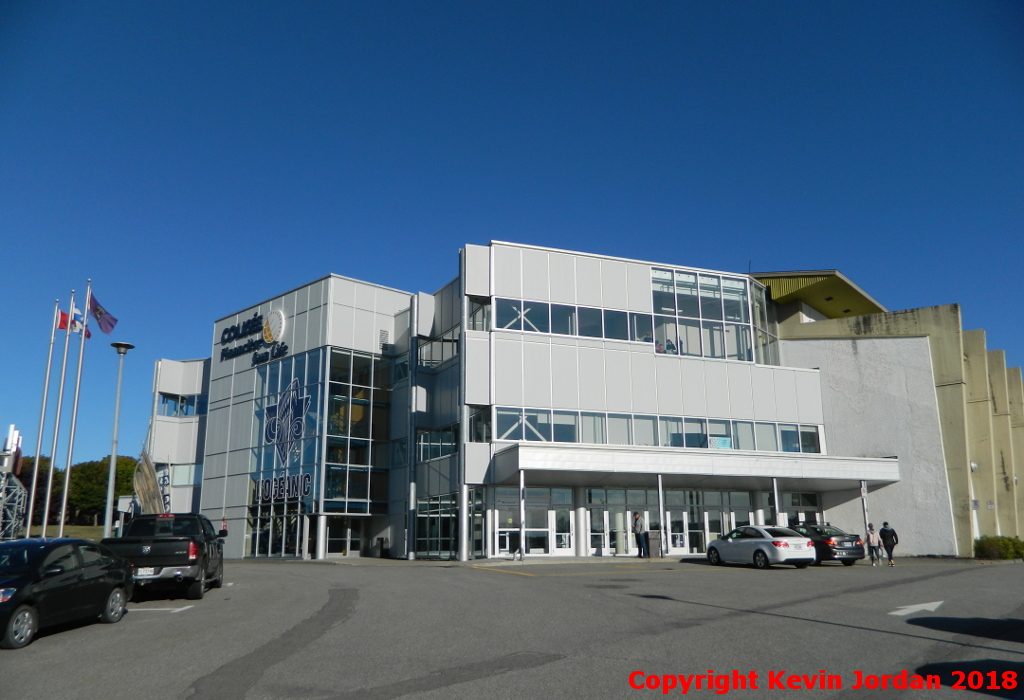 Rimouski is a city of about 40,000 on the south shore of the St. Lawrence River, and marks the last major settlement on the south shore before the untamed wilderness of the Gaspé peninsula. It is a city with a long and deep connection with the sea, being home not just to the Maritime Institute of the University of Quebec system and numerous fishing trawlers, but also to the tender and pilot station at nearby Pointe-au-Père, where once upon a time, ships making the transatlantic crossing to or from Montreal or Quebec City would drop off or pick up their river pilots as well as mail. The city's connection with the sea is also marked in the name of the local QMJHL team, the Océanic.

The Colisée de Rimouski, now renamed for the corporate sponsor Sun Life Financial, sits just south of the town's downtown on a quiet street. Adjacent to the Colisée is a park and a large parking lot, and across the street sits a small shopping centre. The neighbourhood reminded me of that around the Kitchener Auditorium, a pleasant older area with little to draw fans in before or keep them after the game. The Colisée itself has had a new silver and glass lobby built onto it as a part of the preparations for hosting the 2009 Memorial Cup, and a huge team logo and sign greets you from the street, though if you move around to the side, the rest of the building looks tired. The Colisée has passed its fiftieth birthday and looks it from the outside, excepting the new lobby, and the older part of the building could really use a coat of paint.

The newly built lobby includes ticket windows on the one side and a bar on the other, with team offices in the centre. Once into the older part of the building, though, the concourse is still narrow, with all of the concessions and such piled on top of each other in the immediate front of the building. On the one side, a substantial and new team store sits, with all of the Océanic gear one could ever want for sale. It is possible to walk in a U-shape underneath the building, but the home and road dressing rooms are both on the far side of the concourse from the ice surface, and as a result, any time the teams are entering or leaving the ice, rope barriers and security guards keep patrons from interfering from the teams walking to their rooms. If you happen upon the visitors' dressing room on the Sunday of a long road trip, as we did, the unmistakeable stench of hockey equipment wafts throughout the halls.

In the seating bowl itself, there is a "moat" concourse down near the glass, again like the Kitchener Auditorium, and unlike many moat-style concourses, the first row of seating is elevated enough that views of the game are not blocked by passers-by. The moat also includes the players benches and penalty boxes, unsegregated from the crowd apart from security guards directing traffic. It would be frightening to be a visiting player in Rimouski if the crowd really got aggressive!

The seating bowl is about as steeply-raked as any I've ever seen, climbing rapidly into the rafters from the ice surface. As a result, views of the ice are terrific, and there really isn't a bad seat in the house. Moreover, the seats along the sides are heftily padded and about as comfortable as one can find in the CHL. At the back of the seating area there is another top concourse that goes around the entire building, though it is a little too narrow to accommodate foot traffic and standing room both, so it can get congested. Suites exist only in the one end of the ice; on the other end is what appears to be two more rows of seating and a TV broadcast booth, likely built for the extra media at the Memorial Cup. Interestingly in a league where wooden ceilings are still common, the Colisée's ceiling is not wood (it appeared to be covered in asbestos ceiling tiles, which, oh fabulous), but all of the roof trusses are made of wood. The low ceiling adds to the intimacy of the venue.

The Colisée really is a terrific building, with great views of the ice, great atmosphere, and a professional game presentation. The Océanic have been one of the Q's most successful franchises in their history, and you can see why just by going to a game there. The video board is well-run, the music selection is clever and appropriate in volume, and while the building itself doesn't compare to an NHL one, the top CHL organizations - of which Rimouski is unquestionably one - really sell an "NHL in miniature" experience to their incoming players and fans. Thursday night at Windsor Arena, this is not.

That said, the building is not without its quirks. The top level of the building's front addition contains extra washrooms, though the access hallway has a nasty greenhouse effect during a day game, and even though the game I attended there was a Sunday afternoon with a daytime high of 7, it must have been 30 degrees in that hallway. Moreover, the older washrooms on concourse level are the least private I've ever seen, with it being easily possible to see into both men's and women's from the concourse. Shy bladders, go in advance!

The only real disappointment of my visit to Rimouski was the fact that the team has clearly retired the kitschy "Océanic, Let's Go!" song that I remembered from the 2005 Memorial Cup - the team scored nine times over Victoriaville at the game I saw, but their goal song is now "Rock and Roll Part II" just like every other team. Boring.

Arenas from the 1960's and 1970's tend to be seen by the average observer, at least these days, as old enough to be old, but not old enough to be interesting. But the Colisée de Rimouski is one of the finest examples of 1960's arena design at which I've had the pleasure to attend a game. Between the woodwork in the ceiling, comfortable seats with tremendous views of the ice, and the professional-grade organization that plays there, it's a great building, and going to a game there is a great experience. I hope the Colisée continues to host the Q for decades to come. 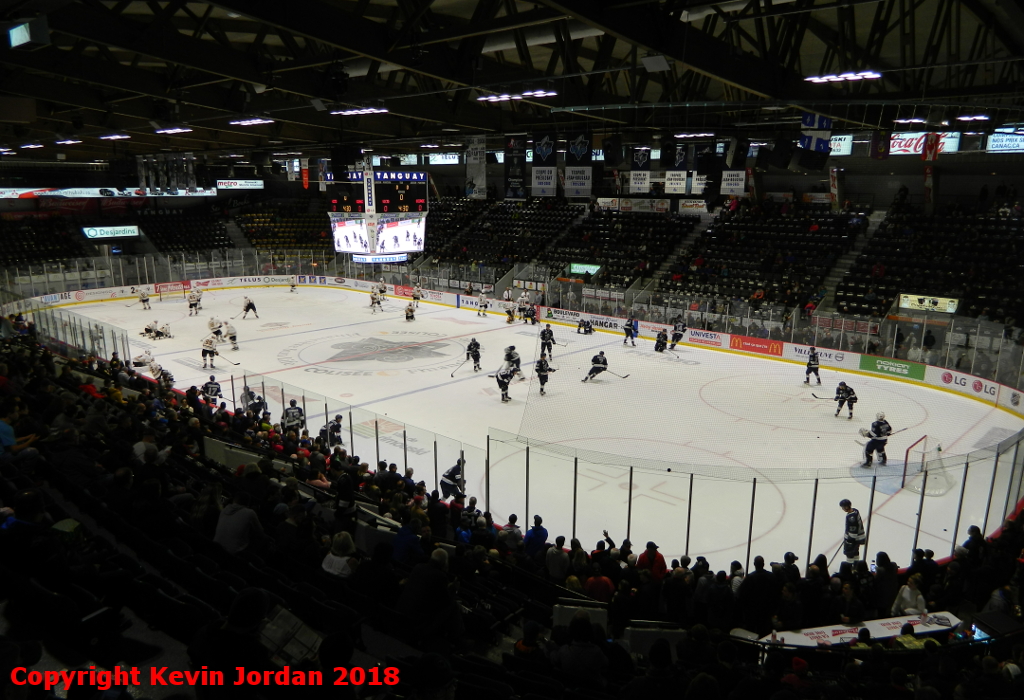 Future Developments
There are no plans to renovate or replace the Colisée Financière Sun Life.


Franchise History
The Océanic franchise is a charter member of the QMJHL from 1969, but they were originally the legendary Sherbrooke Castors (Beavers), playing out of the Palais des Sports. In 1982 the team moved from Sherbrooke to St-Jean-sur-Richelieu, where they played out of the Colisée Isabelle-Brasseur as the St-Jean Castors from 1982 to 1989, and then as the St-Jean Lynx from 1989 to 1995. Low attendance in the Monterégie led to the team striking out further from home, and they have found huge success and fan support since moving to Rimouski. 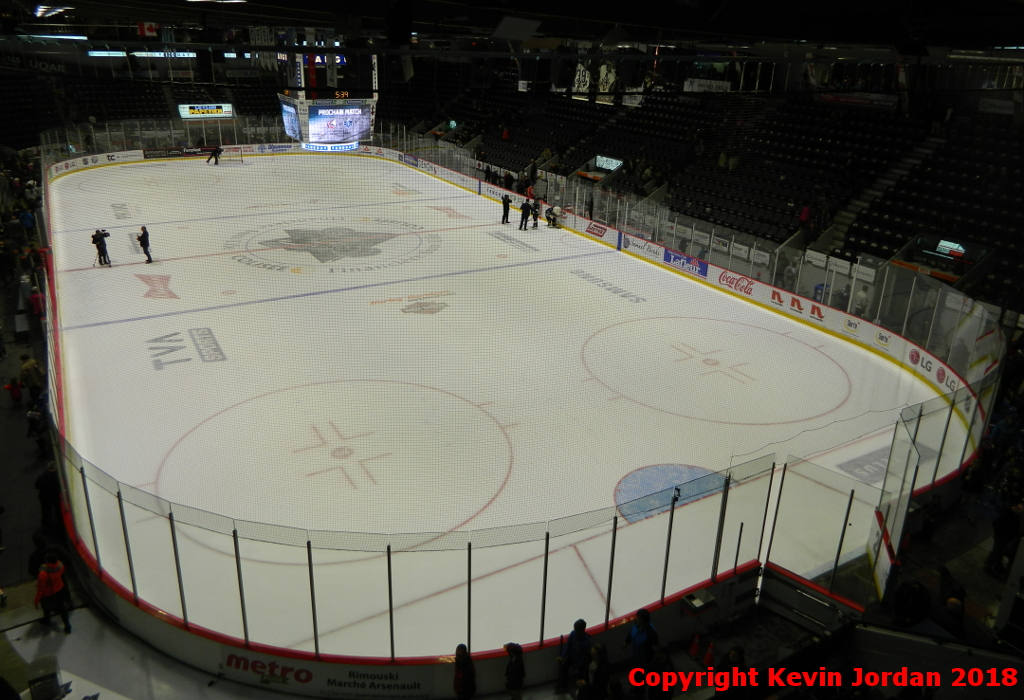