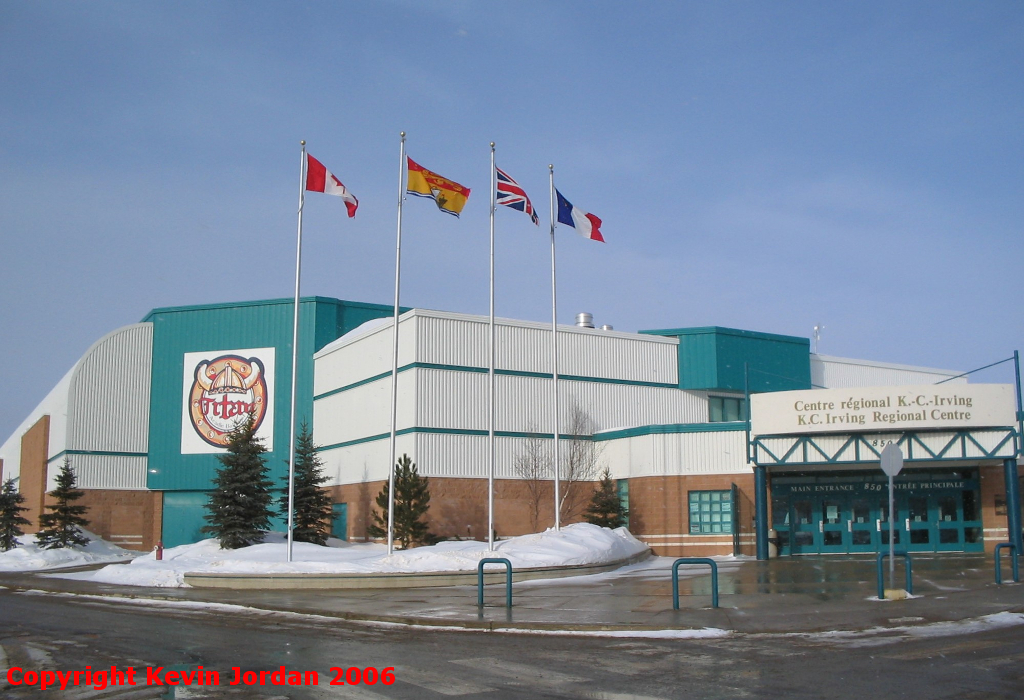 I never expected to be in Bathurst in March 2006. Few people ever wind up in Bathurst by accident. The heart of Acadia, it's remote, wild, coastal New Brunswick, far from any of the province's population centres. I was living in St. John's, Newfoundland at the time, and when I was planning my first proper QMJHL road trip, I decided on Moncton, Charlottetown and Halifax, based upon the schedule on the weekend I could get away and the teams and cities I most wanted to see. A few days before my flight, I checked the Q's website and saw that the Moncton-Bathurst game had been moved unceremoniously and without warning from Moncton to Bathurst. I was still a Q newbie at that time and hadn't known that the Wildcats were frequently evicted from the Moncton Coliseum for a variety of bullshit reasons, so I rearranged my plans in a hurry, and two days later I was driving north on a snowy two-lane road through endless pine forests, heading for a place that I knew nothing about apart from they had a QMJHL team.

Although the Canadian Hockey League now has franchises in major cities like Calgary, Vancouver, Montreal and Halifax, junior hockey is still primarily a game with its roots in small-town Canada. And across the spectrum of the CHL's member cities throughout nine Canadian provinces and five US states, they don't come any smaller than Bathurst, New Brunswick. A tiny harbour town in New Brunswick's remote northeastern corner, Bathurst is at the centre of the Acadian bilingual belt, a section of the country not bound by French Bill 101 or by Ontarian Orange English-language pride, and as a result, the area is perhaps the most uncomplainingly bilingual in Canada. It's interesting to be in a place where English and French both seem to be an accepted part of daily life, and the K.C. Irving Regional Centre (aka the Centre Régional K.C. Irving) fits right into this milieu.

Located on the outskirts of town near a movie theatre, the K.C. Irving Regional Centre is a newish building built of light brown brick and white and teal aluminum siding. There are two ice pads at the arena, with the smaller community pad located around the back of the building. The Centre is not particularly interesting architecturally, but the gigantic Titan logos on the corners of the building make it shout hockey. Once inside the front doors you find yourself in a small lobby with ticket booths, trophies, and a small team store. The main entrance to the arena bowl is located behind heavy doors, and once you pass through these you find yourself in an open top concourse looking out over a sea of blue seats.

The arena layout is a standard CHL clone, with a ring of seats topped by an open concourse, but the concourse is wide enough to maneuver without being too wide, the seating is perfectly-angled to afford a terrific view from every seat, and the standing-room views are terrific too. There are two gondolas of private boxes running down each side of the building, and one end features a large licensed lounge overlooking the ice. The fourth end features a "canteen" restaurant and snack bar. Banners from the team's long history in Laval and in Bathurst hang from the ceiling. In 2006, the scoreclock was new and worked well and had a video screen, but amazingly, the screen itself was barely the size of a standard television set. As a result, it was practically unwatchable. In addition, often on replays the screen shows the words "Video Calibration" which just seems to emphasize the low-tech setup. How they could have designed the clock like that is beyond me; it would almost be better to have no screen at all than one you couldn't see. I'm sure the Titan have upgraded since 2006, but I haven't been back since then. Music at Titan games could best be described as "1990's Gay Disco Dance Party". It's also too loud. Washrooms are fine. The building still felt new in spite of being over ten years old at the time I visited, and it had been maintained spotlessly as well.

Once the game starts the bilingual nature of the building really shows through. You're likely to have French-speakers on one side of you and English-speakers on the other in the stands, and all the announcements are bilingual as well. Half of the advertising signs are in English and half are in French. For some reason, not all the rinkboard ads were sold, though - the Irving Centre features the only white space on the boards I've seen in all junior hockey. I don't know why this is, especially considering there are a number of signs hanging from the rafters. Interestingly, after the game the announcer personally interviewed the first star of the game, and the star's responses were all then translated by the interviewer. The P.A. announcer also pronounced the name of the team "Teetahn" in French and "Tye-tin" in English.

Hockey at the Irving Centre is a great experience. In all the places I've been in the QMJHL, the French language took centre stage at all of those in Quebec, with no bilingualism, no pandering to an English crowd, which, fair enough, right? It's their league and their language and one wouldn't expect French at a Medicine Hat Tigers game, either. At the Maritime buildings, three were predominantly English, Saint John was bilingual on the PA but English in the stands, and even Moncton was English-dominated. But Bathurst was about 50-50, and moreover, no one there treated it like it was unusual. Language is so politicized in Canada that going to a hockey game in a place where it wasn't political was refreshing.

in Bathurst, the two languages exist side-by-side without conflict. It's refreshing. While Bathurst may be the smallest town represented in today's CHL, the people of the Acadian region support their "Regional Team" well. The building has a great atmosphere. As new buildings go, the K.C. Irving Regional Centre is one of the best. While not as over-the-top in facilities as some new arenas, it more than makes up for it with a friendly, bilingual, small-town charm and with a fiery passion for their local team. 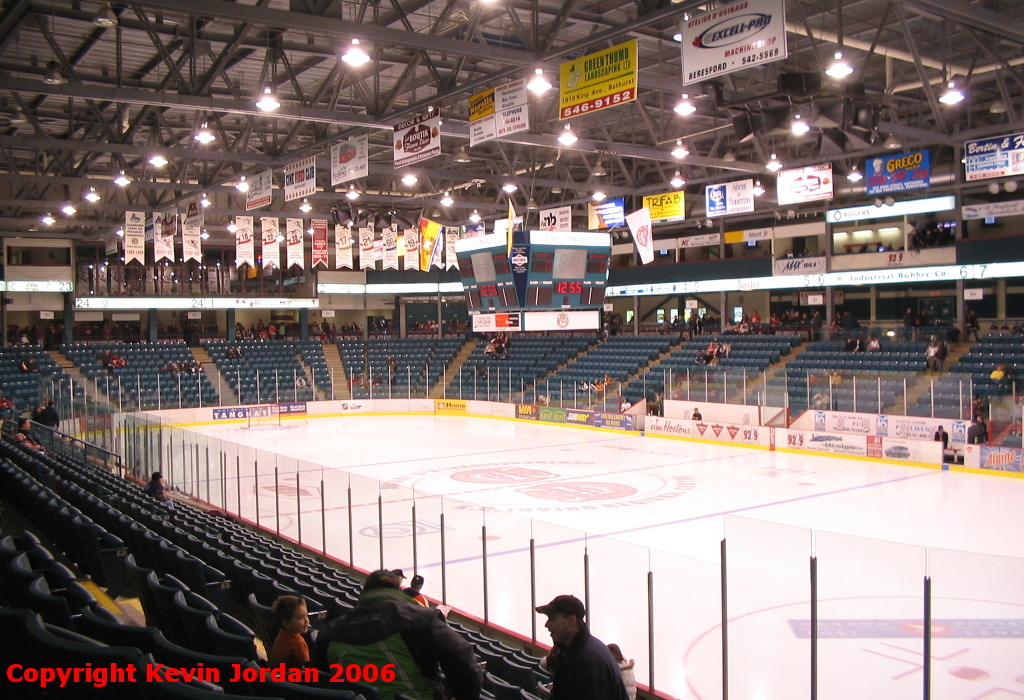 Future Developments
There are no plans to renovate or replace K.C. Irving Regional Centre.


Franchise History
The Titan franchise was one of the founding members of the QMJHL, playing in 1969-70 in the Montreal borough of Rosemont at Paul Sauvé Arena as the Rosemont National. However that did not last long, and in 1971 they moved to the Colisée de Laval, where they would become one of the Q's cornerstone franchises, winning four league titles under the names of Laval Voisins (Neighbours) and Laval Titan. The team produced several legendary hockey players during their time at the Colisée de Laval, including Hall of Famers Mario Lemieux and Mike Bossy. However, the team ran into attendance problems in the mid 1990's, and decamped to the heart of Acadia in 1998.