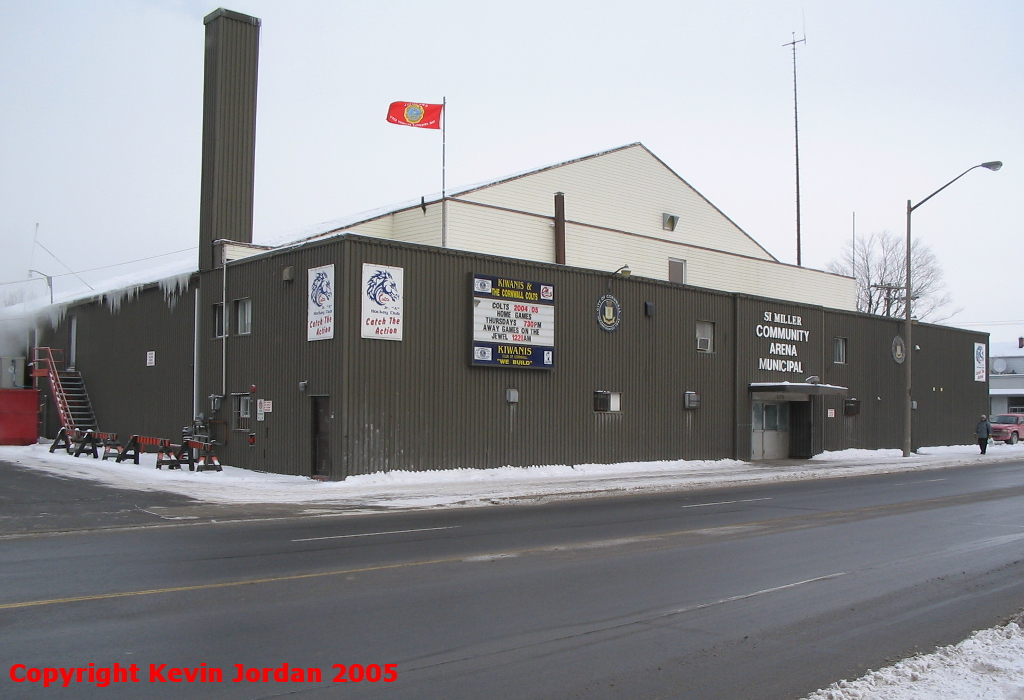 In 2010, as the city of Cornwall was debating whether to renovate or demolish the Water Street Arena, I was quoted in a story in the Cornwall Standard-Freeholder as an arena expert. While I remember arguing in favour of preserving what was then a derelict wreck of a building, I also mentioned that it was easy for me to say that as a person who wasn't a Cornwall taxpayer.

As a QMJHL arena, Water Street Arena was used only up to the opening of the Civic Complex across the street in the mid 1970's. The arena soldiered on, though, and was renamed Si Miller Arena in the 1990's. From the exterior, it wasn't much. Located in the heart of Cornwall's downtown, across the street from the modern hulk of the Civic Complex, the old Arena was clad in dark brown siding and wasn't exactly a welcoming place. All that changed once inside, though. All of the character at the Water Street Arena was inside - from the moment you stepped through the door, the place exploded with colour and atmosphere. The worn, uneven floors at the entrance gave way to a bright building done in primary colours - red, yellow, and two shades of blue.

All of the seats at the Arena were made from wood, and were essentially glorified benches with backrests. A hallway too narrow to be called a "concourse" extended around the building, and actually ducked under the seats in the one end of the building in an unlit tunnel. Banners hung from the ceiling, and there was no centre scoreclock.

The Cornwall Royals always wanted to be in the OHL, and one of the reasons why their first attempt to join the Ontario circuit was rejected in the early 1970s was the inadequacy (even then) of the 1,500-seat Water Street Arena. As the Royals joined the Q instead and went on to one of the most spectacular runs of success in junior hockey history, the city built the new, charmless Civic Complex across the street for the team, and Water Street's colour was lost to the major junior ranks.

What's the Arena Used for Today?
Si Miller Arena was demolished in 2011. The plot of land on which it sat is still vacant as of the last time Google Street View updated in November 2020.